Jennifer Black is married to Kevin, has 2 daughters Sara 16 and Kayla 14. They live in Port Credit, Mississauga. 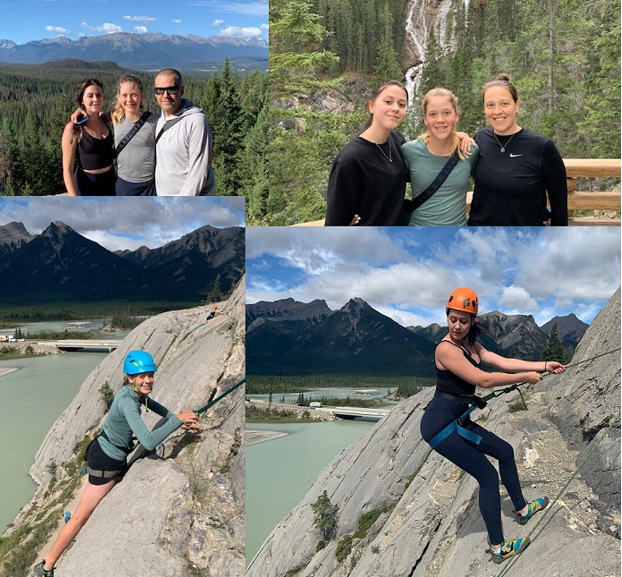 It’s certainly been an interesting year as we continued the trend coming out of last year with Covid still being a disruption. Our team was working remotely for the first few weeks of the year. It’s been great to see the kids get back to more of their regular routines and both are in school full time. Things definitely seem busy again with driving to activities.

In the summer Kayla was invited to represent Ontario at a hockey tournament in Edmonton. We were able to add on an extra week for family vacation and all four of us had a great time seeing the area and we went white water rafting as well as rock climbing. I’d highly recommend the rock climbing. Lots of fun when they start by making you go all the way down the cliff face.

Kayla played a lot of golf during the summer and is now a two-sport athlete still in the high-performance program where she attends school in the morning and trains in the afternoon. Her afternoon training has switched over form Hockey to Golf so that she can keep up both sports. After her golf training she eats dinner and then heads out to Hockey practices, or a game. She is playing hockey with the Etobicoke Dolphins AA, has moved up to forward, and is really enjoying it.

Sara is still in the Arts program focused on Drama at Cawthra Park Secondary, in grade 11. She dances 3-4 nights a week and still has a passion for singing and acting. She started driving in May and is eager to get her full license in the new year. Sara also got a job working at Tim Horton’s on Lakeshore in Port Credit. She enjoys the fast-paced environment and has even moved up to baker for several shifts. Can’t say I like the baking shifts when they start at 3am but it gets me starting my day…soon she can drive herself. 😊

Kevin hasn’t travelled at all this year. It’s still great to have him home. Both of us have very demanding roles and it was clear that as the kid’s activities started up again, we wouldn’t both be able to continue at the pace we were going. In September Kevin resigned and has moved to 50% to be able to do more of the driving kids around and making sure that they get to school each morning. I’m so fortunate to have such a great support to be able to build and focus on making sure all our clients are taken care of. 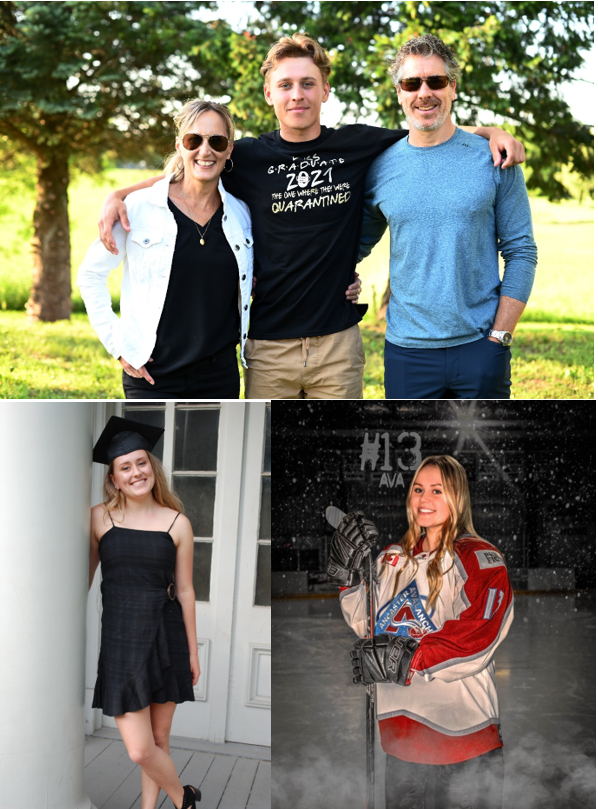 What a difference a year makes!  My eldest daughter Kyla graduated from Mohawk College with a degree in early childhood education but opted to continue her studies at Brock in a continuing education program and moved out for the first time to live in St. Catharines in a condo style dorm on campus. A big step for her, but she’s having a blast making a tonne of new friends and enjoying her program.

Jakob started his first year in business at Laurier and despite all his classes being online, opted to live in residence on campus in Waterloo. Covid has had a way of taking a lot of the traditional fun out of the freshman experience, but he’s hopeful at least some classes are in person for the second term.

Although she’d never admit it, Ava misses her siblings, but keeps pretty busy in grade 11 and playing in her second year of midget AA hockey in Ancaster. Last year was a write off due to Covid, so she’s very happy to be back on the ice playing real games. At this stage, she’s looking to catch the eye of scouts for a spot on a university team in Canada or south of the border after she graduates in 2023.

Jen has recovered significantly from her back issues of the last year, which is great news. While not quite 100% yet, and may never be, she’s at least been able to get back to some of the physical things she loves like running, hiking and biking. She recently started offering lymphedema and breast cancer rehab services out of a local Dundas clinic, which is super convenient due to the proximity.

We are heading to North Bay for a couple days to celebrate Christmas with Jen’s Mom and her family, then off to Mexico to ring in the New Year! Having lost Jen’s Dad this past June and all the social separation the pandemic has caused, we are really looking forward to spending time with friends and family over the Holidays and wish you and yours a very Merry Christmas and a Happy New Year! 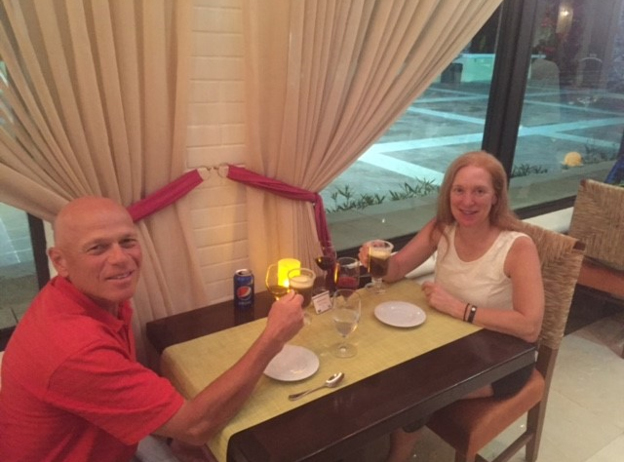 It has been a tough couple of years, but we truly feel blessed to have remained healthy, and to have a great and healthy family around us.

2021 has been an interesting year for us, that being my husband Zito and myself, as we have completed our first full year in our new home in Mississauga. We live right next door to our daughter Jennifer and her beautiful family, Kevin, Sara and Kayla. I know that I am the envy of many of my matriarchal friends to have my daughter, best friend, business partner and grandchildren so close.

Zito and I have just returned from a trip to Mexico where we spent two terrific weeks golfing, swimming and enjoying the heat and sun. Though we did miss our 4-year-old Golden Mountain Doodle, Major, who was dog sat by our aforementioned neighbours. While away, Zito was able to drag me along to his new favourite sport, golf, while I was able to get him out to the pool a few times. I have resurrected my love of swimming and found a Community Centre in our new city of Mississauga where I can get out twice a week for some great exercise.

You likely know all about Jennifer and her adventures and successes, of whom we are both extremely proud. But you may not know that she has a brother Matthew, also with a beautiful family, his wife Kyla, who has gracefully handled a difficult couple of years courageously and successfully enduring a battle with breast cancer, and their three kids, Lennox who has just turned five and her twin brothers who are now just over two and a half years old. We are happy to be able to say that our five grandchildren are energetic and curious, healthy little people, though Sara and Kayla may take some offense to being described as little, since they are both taller than me.

Like Jennifer, our son, Matt, is a great tennis player, whose interests and abilities have led him into a life of coaching/teaching tennis. For the second year running he has been the head tennis pro at two Toronto City clubs throughout the summer and continues to work at a private club indoors during the winter months. Much like Zito’s favourite sport golf, tennis has prospered during the pandemic drawing many new players into their grasp and deepening the love of those already hooked. Kyla is also a great tennis player but has put that aside the last few years to care for the kids.

Zito has been retired from a teaching career since 2006, and as well as golfing and playing basketball, spends time each week volunteering at The Mississauga Food Bank. He patiently awaits my decision to join him in retirement, but there are no such plans forming in my head because I love my work and love working with my daughter, our ACCESS Team, and our clients.

From our family to yours, we wish you a healthy and prosperous 2022, and a very enjoyable holiday season spent with your families.

Jonathan Mullett is married to Michelle, has 4 kids – Isabelle 9, Luke 7, McLean 4 and Kensington 2.  They live in Dundas 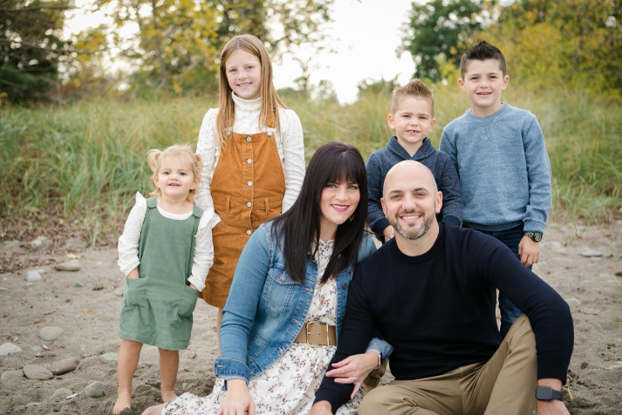 Much like the previous year, 2021 had its challenges – some the same, and a few new ones as well – but thankfulness remains our overall theme.  The pivot from 2020 into remote learning for the kids came back into play for the spring of 2021, but for the current school year, the kids have been able to enjoy learning with their friends at the school.

Kenzie turned 2 in October, but she hit the terrible twos status several months in advance of that.  She’s a hilarious and spunky kid with plenty of energy to keep up with the other three.  Lots more firsts for her in 2021 and having a little one her age at home always makes for loads of smiles.

Isabelle just turned 9 and continues to be a model ‘big sis’.  She loves having a younger sister to care for and is quite creative at it – crafts, skits, games, etc. I see a great babysitting career in her near future. At school, Isabelle is a hard worker and fiercely competitive and we were very proud to see her join the cross-country running team and compete at a few track meets.  She placed well and her team finished 2nd overall in the district competition – which I believe was their best finish ever.

Lukie is 7 now.  He’s still ‘Mr. Congeniality’ and is so well loved by all those around him.  His passion is nature and animals.  He has a million random animal facts that he’s picked up from various books and programs and will often surprise us with a timely ‘did you know…’ or a correction to something we obviously didn’t know, but thought we did 😊.  If you asked him today what he wants to be when he grows up, he wouldn’t hesitate – ‘an animal helper!’.

McLean turns 5 in February and started JK this year and is LOVING it.  He often comes home with elaborate stories of his adventures with all his little JK buddies and looks forward to school every day.  McLean still goes hard at everything and is excited to get the backyard rink going again this winter and improving his skating.

Michelle and I were so thankful for some returns to normalcy this year – Soccer nights, swimming lessons, school, etc.  The reopening of many things has been a huge blessing to our family – giving the kids some needed outlets and allowing Michelle to resume working several shifts per month as an RN in labour and delivery.  As for me? Well, as mentioned at the start, I’m thankful. As the saying goes ‘easier isn’t always better’ – and this year has been anything but easy – but looking back I can say that it has indeed been a very good one.

Wishing you a wonderful Christmas!

Get exclusive deals you wont find anywhere else straight to your inbox!

Globe & Mail video: Why CPP investments are in 'another…

Often searching out the graphical symmetry in chaos, while still maintaining the personality and emotion of the subject. The excitement and anticipation as we waited to see the next piece of unpredictable chaos was electric.